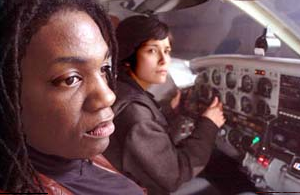 This multi-ethnic production revolves around the character of Maxine (Sherry Okamura), a search and rescue pilot hired by Dessa (Ithica Tell), a mother whose twelve-year-old daughter, Charlotte (Angela Rollins), has been abducted. Maxine’s search for the girl parallels her search for her own mother, Evie, (Julie Cowden) appearing as a ghostly Amelia Earhart figure throughout. Maxine must also care for her elder Grandmother (Trish Egan) while searching for the lost girl.

As part of the rehearsal process, two actresses took a flying lesson in a Cessna (see photo) with Pilot Julie Buckley at Aurora Aviation. The weather cooperated with a rainstorm that definitely helped Sherry Okamura and Ithica Tell conduct research for their characters who fly under storm conditions in the play.