Starting with the fall of Saigon in April 1975, refugees from Vietnam awaited approval to move to the US and other countries. By 1979, there were almost 62,000 Vietnamese in refugee camps, with more than 140,000 people displaced from Cambodia and Laos. Portland, Oregon, was one of the medium-sized US cities that dealt with the relatively sudden influx of every major ethnic group (Vietnamese, Lao, Hmong, Mien and Cambodian) from Southeast Asia.
Fifteen former refugees were interviewed for the Refugee Dreams Revisited project, which was created for the Peabody award-winning series Crossing East that ran on 230 public radio stations.
END_OF_DOCUMENT_TOKEN_TO_BE_REPLACED

Since 1991, I’ve run MediaRites, a 501(c) 3 nonprofit production organization based in Portland, Oregon, dedicated to telling the stories of diverse cultures and giving voice to the unheard through the arts, education and media projects.

We’re in the final stages of completing the  Crossing East Online Archive Project of more than 200 hours of oral history interviews of Asian American/Pacific Islander stories. We need your help to raise $3000 to complete our budget so we can preserve important historical stories. 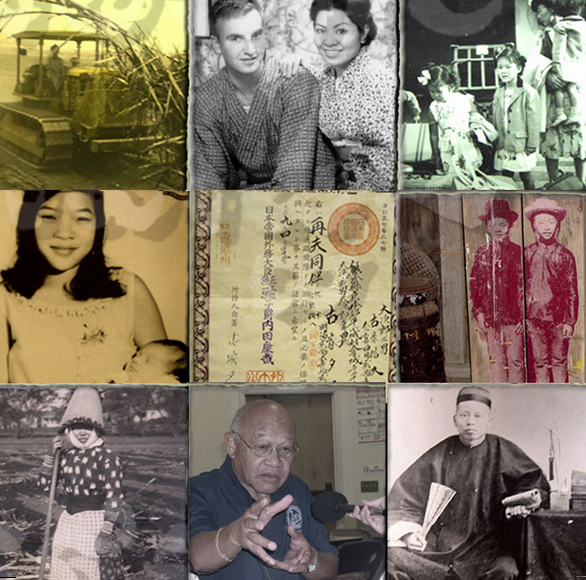 In digitizing the recordings we collected for the original Crossing East history series 10 years ago, we’ve learned so many of the elders, activists and scholars we interviewed are no longer with us.

Since Crossing East aired 10 years ago, we’ve lost historians Ronald Takaki, Wayne Maeda and Jeffrey Barlow as well as civil rights leader Yuri Kochiyama and labor activist Ah Quon McElrath. Ed Wah, one of the last relatives of Oregon’s Ing “Doc” Hay and Carolyn Micnheimer, the former caretaker of the Kam Wah Chung museum in Eastern Oregon are also gone. And so many elders we interviewed across the country have left us too. Their stories can live on in the Crossing East Archive.

Help us with our goal to raise $3000 by the end of the year so we can complete our budget for the Crossing East Archive Project. Please consider an end of the year donation to help us archive all the valuable broadcast-quality recordings, perhaps the most complete collection of AAPI history interviews from around the country and to produce the new “Relations” radio documentary as well as to help youth to perform the stories of Portland’s Southeast Asian refugees elders.

To make a tax-deductible donation, click the PayPal link on the home page of our site: mediarites.org.  Or reply to this email for a mailing address.

Donations of $50 or more will receive a season subscription for our Theatre Diaspora project plays in 2017 or a digital download of the entire Crossing East radio series or anything in our store!

Wishing you a warm holiday season and thank you for your support!

Thank you to our first funders of
our Crossing East Archive Project!

More than 10 years ago, MediaRites debuted Crossing East, (Our Stories, Our History, Our America), the first and to date only Asian American/Pacific Islander history series on public radio.

In 2016 we embarked on an exciting project to save more than 150 hours of oral history recordings gathered for this groundbreaking Peabody Award-winning radio series hosted by George Takei and Margaret Cho.

We digitized all the interviews, transcripts and photos online for the public to use for educational purposes. This act of preservation is called the Crossing East Archive Project.

MediaRites was awarded funding from the Oregon Arts Commission, the Oregon Cultural Trust, the Regional Arts and Culture Council , the Multnomah County Cultural Coalition and the PGE Foundation and built the multimedia Crossing East archive. We created two projects to celebrate the 10th anniversary year. See the Archive at: http://www.crossingeast.org/crossingeastarchive/

END_OF_DOCUMENT_TOKEN_TO_BE_REPLACED

A Language of Their Own

A Language of Their Own
by Award-Winning Playwright Chay Yew

With funding support by a grant from The Equity Foundation,

Chay Yew’s A Language of Their Own focuses on Oscar and Ming who had been together for four years. They break up after Oscar is diagnosed with AIDS, however, neither is able to let the other go completely. Both begin relationships with new boyfriends and find navigating these relationships just as complicated as when they were together – like learning and creating the nuances of a new language.

NOTE: The play contains strong sexual language and situations so parental discretion for minors is advised.

Theatre Diaspora will perform two staged readings of A Language of Their Own, directed by Andrew Klaus-Vineyard, co-artistic director at defunkt theatre) with associate director Samson Syharath, atPortland Center Stage  (128 NW 11th Avenue, Portland) on Saturday, September 10 at 7:30 p.m. and atPortland Actors Conservatory,(1436 SW Montgomery St., Portland) on Sunday, September 18 at 2:00 p.m.Tickets are $10 for general seating and $5 for Oregon Trail cardholders, students and AIDS Walk participants (provide registration). Tickets are available for purchase now at PCS.org for the Sept 10th show and at  www.brownpapertickets.com/ for the Sept 18th show.

The Portland production is produced by Wynee Hu with co-producers Samson Syharath and Alex Haslett, all producing ensemble members of Theatre Diaspora. The cast is comprised of local actors: Jess Ford, Ming Young, Samson Syharath, and Ken Tang. Paige Rogers is the stage manager for this production.

Chay Yew, playwright and artistic director of Victory Gardens Theater in Chicago, is a recipient of the Obie and DramaLogue Awards for Direction. His productions have been cited by the Los Angeles Times and New York Times as one of the “Ten Best Productions of the Year;” Seattle Times and Strangers’ Best Achievement in Theatre; and was named Best Director by Seattle Post-Intelligencer. He has directed world premieres by playwrights Jose Rivera, Naomi Iizuka, Kia Corthron, Julia Cho, David Adjmi and Jessica Goldberg, and performance artists Rha Goddess, Universes, Alec Mapa, Sandra Tsing Loh and Brian Freeman.

END_OF_DOCUMENT_TOKEN_TO_BE_REPLACED

After the War Blues and Philip Kan Gotanda Master Class

Two staged-reading performances will be at 1:30pm on Saturday, June 4, 2016, and at 1:30pm on Sunday, June 5, 2016. Both at Portland State University’s Lincoln Hall Studio Theatre (1620 SW Park Avenue, Portland, OR 97201) with the playwright attending the performances and post-show audience talkbacks.

Tickets are $10 each for general seating and $5 each for students and Oregon Trail cardholders. Tickets will be available for purchase beginning May 1, 2016, at www.theatrediaspora.org and Brown Paper Tickets.

After the War Blues takes place in the aftermath of World War II in San Francisco’s Western Addition District where some Japanese Americans returned from internment camps. African Americans who came to San Francisco were seeking work, white Southern migrants were looking for economic opportunity, and Russian Jews were arriving to start new lives. All the characters struggle to get along with limited resources while trying to find their place in this mix of cultures. Central character Chet Monkawa is a jazz trumpeter who returns to his family’s rooming house after the internment, but his old neighborhood isn’t the same. The rooming house is now filled with new transplants, and Chet and his fellow boarders must find a new harmony amidst uncertain times.

With generous support from Oregon Humanities to bring the playwright to Portland and for the post-show discussions following each performance, featuring the playwright on June 4th and community members on June 5th: Kara Carmosino (APANO), Michael Grice (Nothing But Quality education leader,) and Kimberly Moreland (author of African Americans in Portland.)

END_OF_DOCUMENT_TOKEN_TO_BE_REPLACED

In The Language Archive, a language archivist is consumed by the preserving and documenting the dying languages from far-flung countries. Closer to home, however, he can’t communicate with his frustrated wife, nor deal with the deep feelings his lab assistant has for him.

Tickets are $8 each. They can be purchased at pcs.org for the 2pm March 26th show at Portland Center Stage, and at http://www.brownpapertickets.com/event/2510978 (service charge added) for the 2pm April 2nd show at the Milagro Theatre.

“As a radio producer, I worked on a documentary in Kodiak Island, Alaska about efforts to preserve the Alutiiq language. The themes of dying languages and the importance to communicate with others are of prime importance to me. I saw The Language Archive at the Oregon Shakespeare Festival in 2011 and fell in love with the witty writing and deeply human characters. I was equally surprised to find that the play’s lead characters have rarely been performed by an Asian cast. I’m thrilled to have the opportunity to work with this talented cast for Theatre Diaspora.”

Julia Cho is an American playwright and television writer who has won national awards for her work. She was born in Los Angeles, California, and is the daughter of Korean immigrants. Her plays include The Language Archive, The Piano Teacher, Durango, The Winchester House, BFE, The Architecture of Loss, and 99 Histories. She has been a resident playwright at New Dramatists since 2004. Her work has been produced at the Vineyard Theatre, The Public, South Coast Repertory, Long Wharf Theatre, Playwrights Horizons, New York Theatre Workshop, East West Players, Theatre @ Boston Court, and Silk Road Theatre Project, among others. Honors include the Susan Smith Blackburn Prize, Barrie Stavis Award, the Claire Tow Award for Emerging Artists, and the L. Arnold Weissberger Award. Durango was also named one of the Top 10 Plays of 2006 by Entertainment Weekly and one of the Best of 2007 by the The L.A. Times. She is an alumna of the Juilliard School and NYU’s Graduate Dramatic Writing Program.

MediaRites’ Theatre Diaspora, presents the last play of the 2015 season: The Sound of a Voice by noted playwright, David Henry Hwang (best known for M. Butterfly, which received the 1988 Tony Award for Best Play, and for Chinglish produced at Portland Center Stage).

END_OF_DOCUMENT_TOKEN_TO_BE_REPLACED

The Theory of Everything (August 2015)

In Collaboration with Portland Center Stage and Artists Repertory Theatre